Periwinkle’s father disappeared in his little row boat out to sea, an event which also caused her mother to lose both heart and mind to the sea. Though only a maid at the local inn, Peri decides to try hexing the sea using what she remembers from the elderly witch who abandoned the cottage she now inhabits. But that night Peri is met by a tragic prince who appears with his own wishes. In casting their hex, the two expose a lonely sea monster chained to the bottom of the ocean by giant golden links. While the villagers are obsessed with getting the gold from the sea monster, Peri and a clever magician named Lyo would rather understand the creature itself. Why does it suddenly transform into a young man each night and walk up to Peri’s door, eager to learn the words for the world outside the water and the images he’s seen within it? Filled with the type of magic and beautiful language only this master fantasy-writer could create, The Changeling Sea is a captivating fog of fantasy.

“The Kelpie” is a short story of underwater magic in the book Wonders of the Invisible World by Patricia McKillip. she has written scores of unique fantasy worlds for adults and children alike, including Alphabet of Thorn, The Bell at Sealey Head, and Winter Rose, which share common themes of restless power, the tumultuousness of the sea, or powerful loves, some lost, some found.

The Witch of Blackbird Pond is the story of a girl from Barbados with more power than she realizes to find her new purpose and bring justice to a strange, cold Puritan world. She finds the strangest friendships with an old Quaker widow, a young sailor, and a small girl who everyone thought was too ignorant to become literate.

Dragonsong by Anne McCaffrey is another excellent young adult fantasy book, about a girl who runs away from her father’s oppressive castle because her great love of music has been forbidden to her, and in the midst of a dangerous natural disaster, finds and Impresses 9 fire lizards, the smaller, energetic cousins of the giant dragons ridden in other parts of her world.

The Seduction of Water by Carol Goodman has a brilliantly-written tale of the Selkie legend, and it is a pivotal part of the novel, as the main character’s mother wrote it to reveal to her daughter the whereabouts of a priceless family heirloom, long after she has passed away.

The Safe-Keeper’s Secret by Sharon Shinn is about strangers who visit Damiana to share their secrets with only her. One late night, a mysterious visitor from the city arrives with an unusual secret for the Safe-Keeper—a newborn baby.

I chose to incorporate Blue Moon beer into the cupcakes because Peri works at an inn where beer is the most commonly served drink. It is something she spends much time refilling for the fishermen who at first are seeking to escape the monotony of their lives, then to enrich it with the links of gold chain around the sea dragon’s neck. Orange is a garnish typically served with this white wheat ale to enhance its flavors, because the beer is already brewed with a bit of orange peel in it. And something about the combination of these light, citrus flavors evokes a perfect beach day, much like this book would be a perfect book to take along in your bag to the beach. 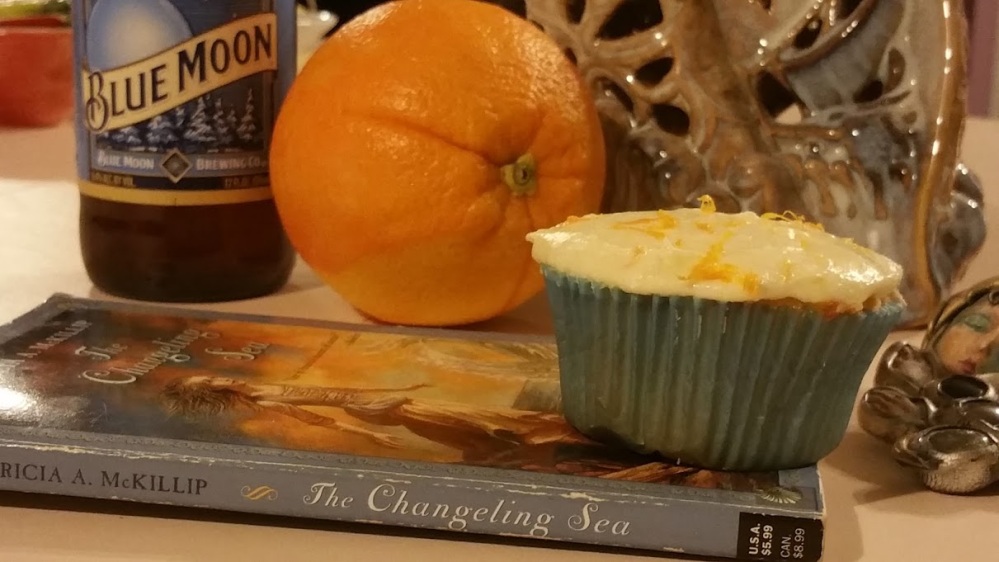