A very astute Catholic boy loves to play soldiers and other adventure games with his mute brother Hanny. But the young boys’ wanderings along dangerous coastal tides and discovery of a rifle will lead to such monstrosities (especially in the surrounding woods one night), that Hanny will suppress the memories as an adult, leaving only his brother, Smith, to tell their horrifying story. Their mother, a devout Catholic, is convinced that their yearly Easter trips to the shrine of Saint Anne in the deep Irish country will one day bring about Hanny’s healing, as long as they all fast long enough and pray hard enough. But during this last trip to the derelict, ominous house in Coldbarrow, the first time for the newly-appointed priest Father Bernard, they encounter three menacing locals and a violent dog. The caretaker of the home, who is more involved than he will speak of, warns the group repeatedly to avoid the dangerous men and especially not to seek them out or allow them into the house, no matter what they offer. The Loney is a chilling revelation of the truths people accept, and of the sinister, violent sacrifices people make in desperation. 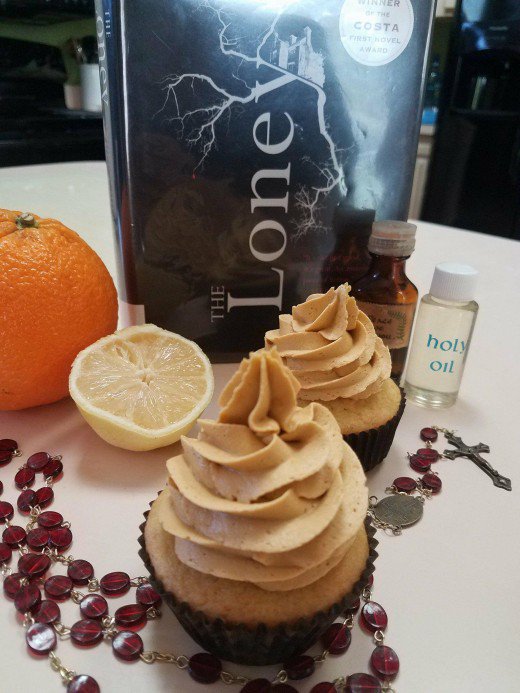 The bishop was eating a large piece of Dundee cake at the introduction of the newly appointed Father Bernard to his parish. Dundee cake is a traditional Scottish fruit cake with currants, sultanas and almonds; and sometimes, fruit peel. Also, at the last dessert the group ever ate at the house in Coldbarrow, Mummer had made “a simnel cake with a sugar paste face of Jesus in the middle and twelve marzipan balls around the edge.” Simnal cake typically is a lighter fruit cake with layers of almond paste or marzipan. To combine these cake flavors and ingredients, I created a light almond cake with orange and lemon zest, with an almond orange zest frosting.

Other books by Andrew Michael Hurley include Devil’s Day, The Unusual Death of Julie Christie and other Stories, and Cages and Other Stories.

A female writer very similar in the dark, Gothic nature and vivid descriptions of this novel is Daphne du Maurier, particularly her books of short stories such as The Birds and Other Stories, Don’t Look Now: and Other Stories, and the terrifying novels Jamaica Inn (also a tv miniseries on Netflix) or The House on the Strand.

Books mentioned within this book are the writings of Henry Wadsworth Longfellow, Charles Dickens, the novel The Island of Doctor Moreau, and a book of Greek history, though for mythology references, an excellent option to explore would be Edith Hamilton’s Mythology. Two more stories mentioned in the reader’s notes were the novel Wuthering Heights and the short story “The Birds”.

Jennifer McMahon also writes excellent terrifying tales with wonderfully twisted climaxes. Some similar novels of hers to this one are The Night Sister, The Winter People, and Burntown.

Lastly, Stephen King wrote a book of four short stories called Hearts in Atlantis, the first of which is very similar to this book, especially its main characters and the concept of wicked men and those in search of miracles or denying truths too difficult to concede.