Quentin is a high school boy who lives next door to the girl of his dreams, Margo Roth Spiegelman. But is it an imaginary person or the real girl he loves? He thinks he finally knows her when she offers to take him on an unrestrained night’s adventure of revenge, blackmail, and even breaking and entering into Sea World at night. But when Margo disappears, Quentin enlists the help of his friends and even one former friend of Margo’s who thought she knew the real girl as well. Is Quentin a paper boy living in the paper town of Orlando? Or is Margo a paper girl and is the paper town in a different state altogether? As Q pieces together the clues and is led across the state and even over state lines, he will learn what it means to be free, to be connected, and to see others through their cracks. 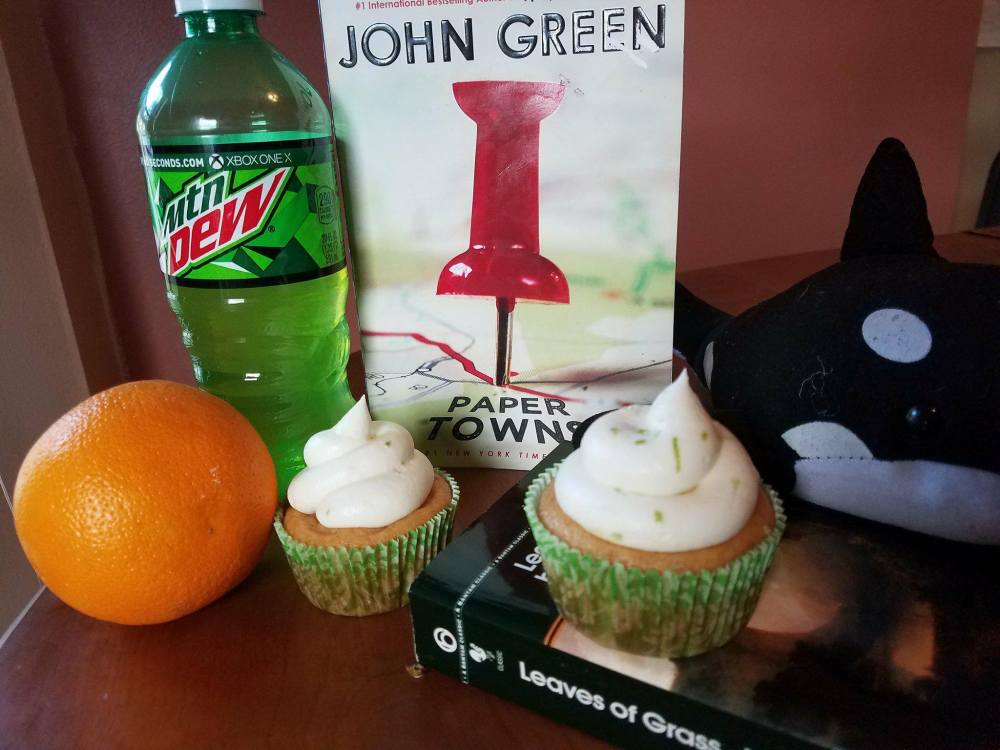 On the great, wild night of adventures, Quentin purchased Mountain Dew for fuel for himself and Margot, the last of which they drank just before “visiting Sea World” in the middle of the night. Mountain Dew has a citrus taste and is made with orange juice. The recipe is for a Mountain Dew Cupcake with Orange Lime Frosting.

Other books by John Green include the brilliant new Turtles All the Way Down, which looks inside the mind of a girl with OCD who decides to help her friend and neighbor find his missing billionaire father. Looking for Alaska is also very similar, about a college boy who falls for the most amazing girl, and tries to unravel who she is and her tragic story.

Books and authors mentioned within this book, mostly for school, were The Great Gatsby, Moby Dick, “Song of Myself” from Leaves of Grass, The Outsiders, Jane Eyre, T. S. Eliot, The Bell Jar and Slaughterhouse Five, as well as selected poems of Emily Dickinson.

Sloppy Firsts by Megan McCafferty is also about a brilliant misfit teen who does a wildly uncharacteristic thing in order to connect with a fellow student and show she’s not who people think she is.

Me, Earl, and the Dying Girl by Jesse Andrews is about a teen boy trying to survive through high school and somewhat succeeding, until he is forced to befriend a girl dying of cancer.

The Cheese Monkeys by Chip Kidd is about a sarcastic college student who takes the most unusual, creatively and intellectually challenging (and at times sinister) of art classes, and becomes obsessed with a fellow classmate, who believes herself to also be always on display and to have to live up to other’s expectations, much like Margo.